Starter slappies vs. backup slappies...which one are you

Does Boyle improve in this?

Personally, I expect similar numbers with a couple added ints

Is Gooffy officially out this week?

For starters , there’s only one eff in Goofy. There are, however, two effs in Gaffe, Goffaw, and Guff. “Goof” is the witless equivalent of girly-tossing soft pretzels.

Btw, you want Mutt Stifford back ? I dunno how long Kupp can pull his geriatric chokester carcass.

Goff did NOT play badly vs The Squealers. Y’all are blinded by the frustration of a frustrating season, imo. I iked the selfless & smart kills into run plays - both Swift & Campbell noted this, not just me.I liked his ballhandling -the gloves helped, & there were several excellent throws in there that should have made more of a difference, but the support wasn’t there- the deep ball that Amendola, never mind Cephus, could have made a better attempt to jump for, the drop on the sidelines by Saint on the final drive of reg time, the vintage YAC-gobbling laser in OT to Saint(?) that was squandered with a 3 & out of run plays.

Yes, DET might beat CLE with Boyle , but it’ll be because of the improved run game, Decker-bolstered OL for pass pro & steady improvement on D, not subtracting Goff.

I know you guys have PretzelGate to obsess over & the weekly “the team is undermanned/undertalented but it’s still all about the QB” rants, but let’s not get totally…um…goofy here.

Lol , so I take it you don’t think someone being able to throw the ball past the line of scrimmage will help ? Goof , Gafe, Goff what ever he is called, is terrible at this point. So If Boyle or Bough can throw the ball more then 10 yrds and hit the WR it’s a upgrade and is a big reason we will win if we do. Haven’t seen a QB play this bad sense MoonBall Garcia. Running the ball like we did is nice but if your counting on that every game you will be disappointed.

Not sure what your not seeing but

Might could. But it can’t hurt for Goff to chill with some chamomile tea on the sidelines for a couple of weeks while giving our WRs some plausible reason for running more than 20 yards down field. If given the choice at this point in this season between gumming lime Jello (Goff) and biting into chef’s surprise caliente (Boyle), I’m going with caliente.

I do think blough could have made an impact with his legs if nothing else. Maybe he evades the rush and gets 20-30 yards on a scramble. Who knows. The one thing I know for sure is we could have gotten a huge play on a fake dive qb keep around end. The Steelers were crashing so hard the sidelines were wide open. Goff doesn’t have that ability though. Even when healthy.

What am I seeing ? Well, in your case, an agenda-driven campaign that began before the draft that relies too much on repeating the same generalities to substantiate your original position, not dealing with the actual performances. Goff has definitely played below the par I expected from him, but it hasn’t been uniformly awful & it’s totally absurd not to deal with the mitigating circumstances & continuously reassess game-by-game. That is, if you’re interested in Detroit’s success & not just being right…

The run game comment is interesting. As a lifelong Rams fan - I’m older than dirt, so we’re talkin’ half a century here- I have a deep appreciation for a good running game. Even when The Rams have struggled, they usually had that going for them. I think the opposite is true for DET fans, the Sanders era being the exception- just as the Warner GSOT was for us- you guys have had to cling to exciting QB play during the dark times. Different standards/criteria.

The idea that a dominant run game can’t be the basis for a SB winning season is just silly. It may not be the kind of football you like, but it can be devastatingly effective. This cliche about it being all about the pass is drivel if you want Lombardis, not just regular season fireworks. Just ask Rodgers, Wussell, Peyton, et al. Great QBs who don’t have nearly as many SB appearances, never mind wins because they didn’t invest resources in/emphasize the run game.

Might could. But it can’t hurt for Goff to chill with some chamomile tea on the sidelines for a couple of weeks

I agree that Goff should sit this week.
No reason to play a hurt QB this season.

I just hope they develop a VERY specific gameplan tailored to the limitations of a backup QB who has hasn’t had a ton of reps lately.

And… throw it DEEP on 3rd and long… with the extra OT in game for extra protection… on a designed rollout away from Garrett.
If it gets picked… it is like a punt (from a mere mortal… not like a Fox punt).
And they might get a PI called if it isn’t caught (probably not since we are the Lions after all).

If boyle statistically bests goff I will change my user name to “Boyle > K. Moore”

You never know man. A lot of times the backup will come in and play well. The foles effect. Simply because teams don’t have any film on them to study their tendencies. I hope that’s the case for us. I’d really like to get a win sooner rather than later. For a bonus though I also have a good buddy that’s a browns fan.

Goff did NOT play badly vs The Squealers. Y’all are blinded by the frustration of a frustrating season, imo.

Oh my god, i want whatever drugs you are on! Send them to me asap. Goofy was horrific vs the Steelers. He had 2 interceptions dropped by Steelers players in the rain and another interception called back for an iffy holding call. He should have thrown 3 picks, while barely cracking 100 yards passing. Seems like a nice guy, but he’s a pathetic excuse for a QB.

“there were several excellent throws in there that should have made more of a difference, but the support wasn’t there- the deep ball that Amendola, never mind Cephus”

Amendola plays in the AFC and Cephus hasn’t played in weeks, he’s on IR. Once again please send me the drugs you are on. You clearly didn’t watch a single play from the game last week.

So many LA QBs that looked like they were the solution for about 30 games, then

You are a lil’ too easily horrified by almost INTs, imo. Kinda like being almost pregnant; a little sphincter-winking & it’s over Anyway, Stifford threw waaay more near-INTs in the SF game so nya,nya…

The holding - which was clear - just like the uncalled facemask on Goff later in the game - CAUSED the pick, imo. You probably didn’t see the borderline hold/undoubtedly half-assed block disengagement by Hock on that inside TE screen in the RZ, either.

The point about Amendola is that he’s familiar to you & me as a former Lion Ram with good hands but short…y’know , not likely to be good at 50/50 balls; that pass to Raymond was underthrown but still contestable was my point. The point about Cephus, who showed some fight above the rim, was exactly that he IS on IR & DET is relying instead on a munchkin speedster journeyman who jumped like a pregnant alligator on that play.

0-15-1, huh ? Yeah there’s the spirit that sustained us after the Germans bombed Pearl Harbor.

The truth is the only drug you need, my Denizen friend.

Anyone but Jared Goff

No words to sugarcoat

Ha! Awww ,no , you didn’t just play the Chrissie card !! You forgot the washed up version of Broadway Joe and my fav, Dieter Brock, though. Ol’ Dieter made Goff look like Michael Vick.
But then Orlovsky makes Goff look like Peyton 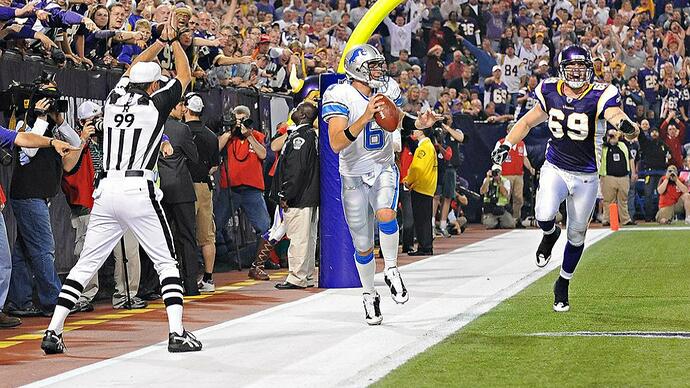 I want us to win

We win and we are still a viable, mathematical threat to win a WC!!

Thank you and good morning Vietnam!!