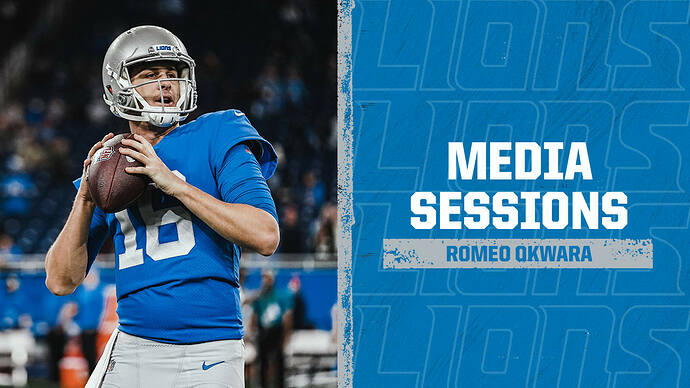 Goff on end of season improvements

Quarterback Jared Goff talks about the team's performance at the end of the season compared to the beginning and how they home to grow even more through the offseason.

I’ve been doing my best to hate the guy, but I really appreciate how forthcoming and straightforward he interviews. After almost a decade of monotonous, canned answer snoozers, it’s quite refreshing.

He handled the bit about possibly drafting a replacement about as well as you could. That’d be fine and I’m under contract, basically. I’ll be here either way.

Seems to like it here. Says it’s beautiful. I chuckled when he said his favorite part is the food. Wouldn’t mind playing here for ten years. I suppose what else can he say there?

I can’t put my finger on why but there’s something about watching Stafford play that just didn’t do it for me; just didn’t quite look right. The way he wore his shoulder pads? The way he carried himself? His body language? I dunno. I actually find myself enjoying watch Goff sling it more, at least when he’s playing well. Is it because… if you look at him thru foggy glasses… he kinda resembles a poor woman’s Ryan Gosling? Hard to say.

Don’t get me wrong. I still would draft me some Willis, given the option, but I can’t hate this guy in the mean time. He grows on me. Like mold on the bathroom ceiling.

I think Lynn was to Goff as Lombardi was to Stafford

Lombardi wanted Stafford to play within Lombardis system which didn’t really match the skill set of Stafford. It led to a lifeless offense that thrived again when Lombardi was let go and Cooter asked Stafford what plays he likes to run

When DC took over I think he met with Goff and implemented an offense of plays Goff was comfortable with as well. After the Cards game (I think) I remember watching a clip of Goff mic’d up and saying to Reynolds the crossers they were connecting on was ‘just like old times’

Good coaches always work towards players strengths and don’t force them to do run things they aren’t comfortable or confident in.

Patricia was the worst at this trying to force players to do things they weren’t good at.

Is it because… if you look at him thru foggy glasses… he kinda resembles a poor woman’s Ryan Gosling? Hard to say.

Good analysis. If Goff’s your wingman at the club, you’re going to get a far hotter group of women than if it was Stafford. That’s not debatable.

Goff is also a lot calmer on the field than Stafford, which will be helpful when this team makes it to some big games.

Goff needs to get stronger this off-season. He doesn’t look like a guy that takes strength training seriously. He should. He also needs to do an arm strength program similar to what Joe Burrow did … there is definitely room for improvement.

He’s been a number one pick and a starting QB in a Superbowl. He has talent … he just needs to go all in and address some of his weak areas in the off season. Oh, and don’t be afraid to throw the ball away instead of holding it for 7 seconds and taking a sack on 1st down.

I’ve watch Goff for almost 10 years and the 2nd half Goff is definitely the more common Goff. That is what he should give the Lions the majority of the time assuming everything else is functioning at a normal level.

Goff is lanky and sometimes awkward looking in his movements. It does not look aesthetically pleasing to the eye the way a ballerina moves on the dance floor. A lot of people will watch Goff’s body and think he is not a good QB because he isn’t fluid like a Michael Vick. What they don’t zero in on is how his passes are pin point in stride with the WRs not even having to move their arms. @Air2theThrown saw this first hand in the off-season.

As a interviewee and general demeanor, Goff is thoughtful and articulate, but also very calm and relaxed which a lot of people will take for apathy or disinterest. He started to show his fire, especially after that win against Arizona. He cares a whole lot and wouldn’t have played against the Packers if he was just collecting a check.

As far as Stafford comparisons, I feel like they are very similar in interviews. Both are humble and gracious. On the field, they are both kind of awkward in movement, but Stafford less so. When Stafford throws the deep ball it’s a thing of beauty. When Goff gets in a rhythm and is slicing a defense up with perfect throws it’s a thing of beauty as well.

As to the presser, I think he’s ready for next season. He knows things are the right track and he doesn’t want to wait for it. He was expecting the question about if he is a bridge QB and he’s just going to spend his time doing his best for the team and let the chips fall where they may.

He’s really easy to root for. Matt was too. Both seem like genuinely good guys.

Wonder how he’ll warm up to Jason Garrett.

Wonder how he’ll warm up to Jason Garrett.

That is a nice compare and contrast of strengths.

To me it’s Stafford’s intermediate and deep sideline shots on 3rd down that keep the chains moving. I’ve seen Cousins and Goff and many others throw beautiful deep passes. It’s the frozen-ropes or those passes where he’s bending it around defenders on crucial downs that are really what gives Stafford his identity to me. From season 1, back to the endzone on a 3rd and long and he fearlessly hits CJ in stride for a 25-yard gain… Thing of beauty.

Goff has grown on me as well. Hopefully he can show in 2022 that he can be a guy we can build around as that will be huge for us long term. At this point though, I can confidently say that I am happy with the results of the Stafford trade. Goff has proven he can be what we intended him to be at a minimum, which is a bridge QB. We also got Melifonwu and 2 1st round picks out of the deal.

Wouldn’t mind playing here for another 10 years… that would require a lot of playoff victories. Hope he gets his wish.

He’s really easy to root for. Matt was too. Both seem like genuinely good guys.

Yup. Many are taking the dramatic approach in feeling loyal to “their guy” by bashing “the other guy”.

While I Much Prefer Stafford, root for both of these cats. Quality human beings.

“If you don’t chew big red then fuck you,” approach, while hilarious at times, doesn’t match up for me here.

I was super critical of Goff in the 1st half of the season and he deserved it. We were 0-8 at one point and the offense was one of the worst in the entire nfl and the passing game was especially pathetic.

However, the last half of the season, he looked like a new man and I’m happy to admit I didn’t see that coming. We all like a comeback story. Next year is a huge year for Goff’s career, he’s either going to continue excelling like he did down the stretch under Campbell and Johnson’s leadership or become a career backup with a poor season.

And that is the main reason I don’t want an outside hire for OC that will likely change the entire offense again. Promote Ben Johnson to OC and keep having a collaborative effort on offense with Campbell, Duce and Johnson that works to Goff’s strengths.

Goff started having fun again late in the season, you could see in his body language. And his confidence was coming back. I truly think McVay broke his spirit and confidence when he gave up on him. And now MC/DC is building that back up!

Only time will tell. I sure Goff proves all the doubters wrong, including myself that was so hard on him.

I think you nailed that comparison. Man, that Lombardi signing was so exciting. What a bust that was. Goff seemed like a viable starter after Lynn stopped calling the plays.

Watching Goff play last year in GB banged up and still keeping them in it sold me as him being a gamer and having that quality will get you a win in the playoffs. He won’t be scared of a big moment he played in a super bowl just hope we can build a team around him to get to those games.

I never criticized Goff all season while others heads were exploding. I mean, what in the fuck did people really expect once our roster and staff was set? The staff ended up being better than expected and the team ended up being what I expected. Next season, we should be a competitive team, no reason not to be. Goff showed what he could do when he had legit players to play with, and the team played hard even though some will go the way of “The Replacements”. Last hurrah but they got on the field and had their chance.

His play in last season’s playoffs was enough for me to know he is a gamer. He played and won injured for the rams.