What percentage chance do the Lions take Jordan Davis at 2?

Alright. I had to ask, because I am just that crazy.

No I do not think they will do it.

No I do not want them to do it.

I’m just asking on a scale of 1 to time travel, how impossible is this idea?

0% @ 2nd overall for sure. However, with the 2nd pick in the 2nd round, I would consider it. I really don’t think Davis is a 1st round pick. Sure, he’s a stud in the run game, but spends more reps on the sideline than on the field overall when you look at snap counts. Are you really going to spend a 1st rounder on a dude who plays less than half of the defensive snaps? There is some real risk involved with his conditioning level and lack of a pass rush.

I don’t think it’s as much of a long shot after watching us get gashed by the run this year. You can get some very solid, good edge rushers as well as WR’s in FA this year but you cannot get a dominate DL player in FA this year, it’s just not there. If you can’t stop the run you won’t get a chance to stop the pass.

Davis is a 1st/2nd down player which I agree, that’s 50% of the snaps. However if that makes it 3rd and 7 instead of 3rd and 2, I’d take that. I mean, Davis beats double triple teams regularly, that’s insane and there is not another player like him in the draft.

All that said, I think it’s more likely, that if the Lions Staff zero in on Davis they will look for a trade partner in the 5-10 range where you still have some options. You trade down, pick up an extra pick, then take your guy. This also takes the heat off a little bit for not grabbing the hometown hero.

He’s not on the same level of prospect as Derrick Brown was a couple years ago so I would be…well shocked to be honest.

is there an option for negative percentages???

Unless we are talking two negatives as that makes a positive!

I think its very low just because I believe he is viewed as a non pass rushing DT. And although a giant in the middle is very valuable, its not a player picked top 5. Its a player picked top 20 by a team really good and will stay good with unsexy moves like this.

I agree, he’s much more of an Albert Hainsworth kind of build than Derrick Brown. It would be a big risk that high in the draft.

Unless we are talking two negatives as that makes a positive!

I am 100% positive that Jordan Davis will NOT be the 2nd pick. 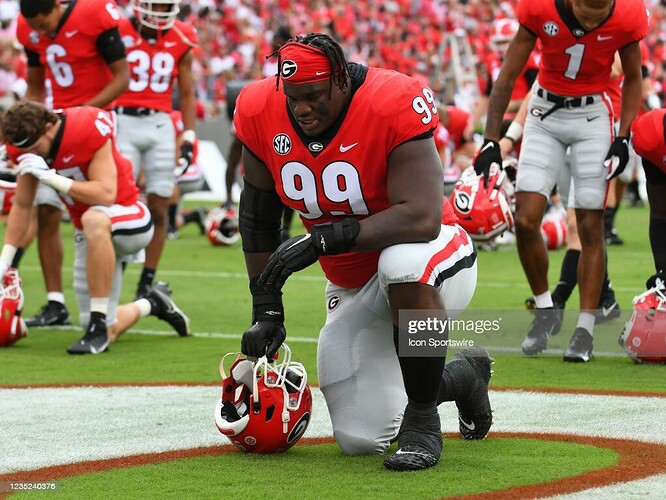 I think they would be more inclined to take one the LBs at 2 overall than him… that being said late first early second… I dunno. He’s a huge human for sure. We tried that once with Aaron Gibson who turned out to be an ok pro albeit on the bears. I think he’s available in the 3rd just based off skill set. They took him out a lot as @stephenboyd57 has pointed out.

But the dude is enormous. Good combine with good interviews and a coach or two thinking they can do something with him? Who the heck knows.

Holmes called the OL and DL strengths of the team. They very well might draft or bring in a interior DL in FA, they should, but it isn’t happening at number 2. Kyle Hamilton has a stronger shot at happening then Davis. 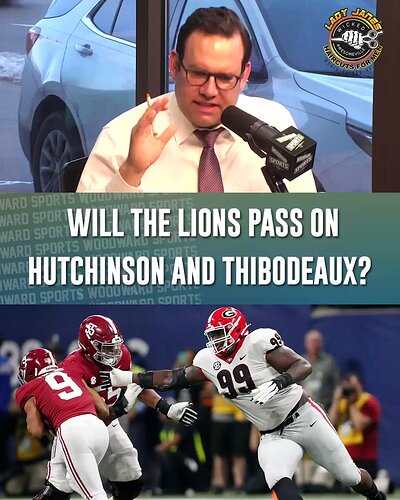 Did the National Championship change your mind on who the Lions should take in the draft? #nationalchampionship https://t.co/qmoWWNYt45
Spiel54man January 12, 2022, 4:20am #17

Unless they are going to do to DTs in the draft what Matt Millen did with WRs.

Holmes called the OL and DL strengths of the team.

Anything Holmes or DC say about the roster between now and the draft should probably be taken with the understanding that they aren’t going advertise their plans.

I think most of us realize that Davis is nowhere near a top 5 pick… but that is another topic.

If I want a 2 down NT I would look further down in the draft like big John Ridgeway out of Arkansas.