What this guy thinks would be a perfect off season As another poster said, over the half the league has an offseason plan that starts with “sign Daron Payne.” Whomever gets him is going to pay massively for his services. This guy is going to get Aaron Donald money to not be Aaron Donald.

They are going to have to make a decision pretty quickly, and its going to have a ripple effect. They have already paid Jonathan Allen $20M/year. Payne is a free agent. Montez Sweat will be playing on the last year of his contract at $11.5M. And Chase Young is already eligible to renegotiate. Between Allen, Young and Sweat they are already paying over $40M next year.

The Athletic had an article reporting a team source stated they would like to keep him. 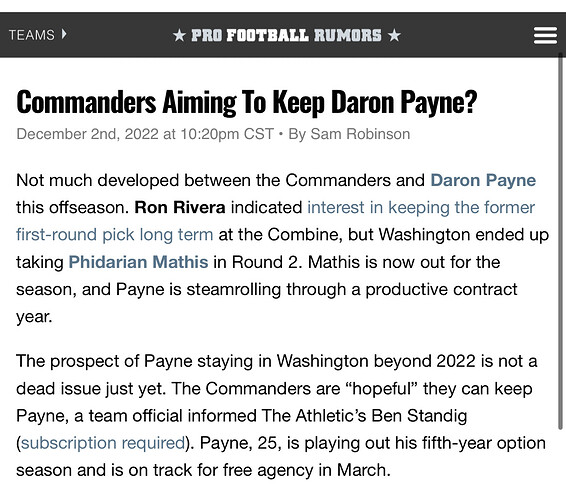 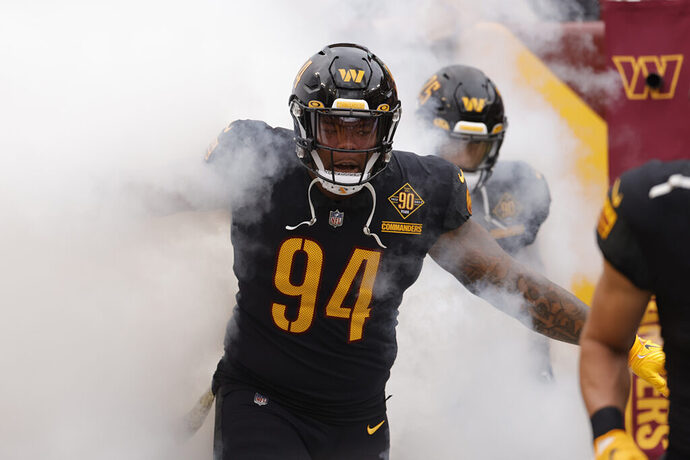 Not much developed between the Commanders and Daron Payne this offseason. Ron Rivera indicated interest in keeping the former first-round … 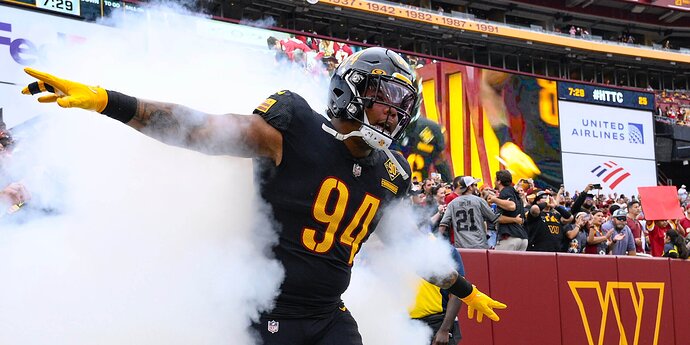 ‘Man on a mission’: Inside Daron Payne’s contract-year breakout (and a DT...

Payne is boosting his stock at the perfect time, as many around the league expect the defensive tackle market to erupt this offseason.

I didnt know we had 3 2nd rd picks

I didnt know we had 3 2nd rd picks

We dont @Gridironbully. What he’s saying is with his scenario we will have a third second round pick if we do the trade with Carolina, which we will then package with another of our 2nd rd picks to trade back into the 1st.

The different draft scenarios are interesting to toss around, but I can’t ever take the “just trade down” scenarios seriously. I don’t think they should even be a part of the discussion unless they actually happen. If he wants Tyree Wilson, then argue for him at 6 because that’s the real pick. You can’t just make Carolina swap picks and give you draft capital.

As far as Payne goes, it sure seems like Holmes strategy is to try and draft the next Payne vs pay for him in FA. I’m all for making an off-season splash, but if they do I guess I’d rather it be a trade for a player vs a bidding war with 10-15 other teams in FA.

Only 3 months till the draft.

Yeah i don’t take any mocks with trades seriously at all. They get filed under fantasy immediately. I want to trade down. But putting that in a mock ruins the fun of making a realistic mock attempt.

Yeah i don’t take any mocks with trades seriously at all. They get filed under fantasy immediately. I want to trade down. But putting that in a mock ruins the fun of making a realistic mock attempt.

Agree with regards to mock trades, not because they can’t happen just in what the return ends up being in many of the simulations.

Yes, and they are always biased based on the favoritism of the mock maker.

Payne is a good player, but probably not even a top 10 DT. He is going to get paid like a top 3 DT. To me he just won’t be able to live up to the contract he signs. Its a hard pass for me.

I like him as a player. But I believe you have nailed this. Someone else can pay for an elite player and get a good one.