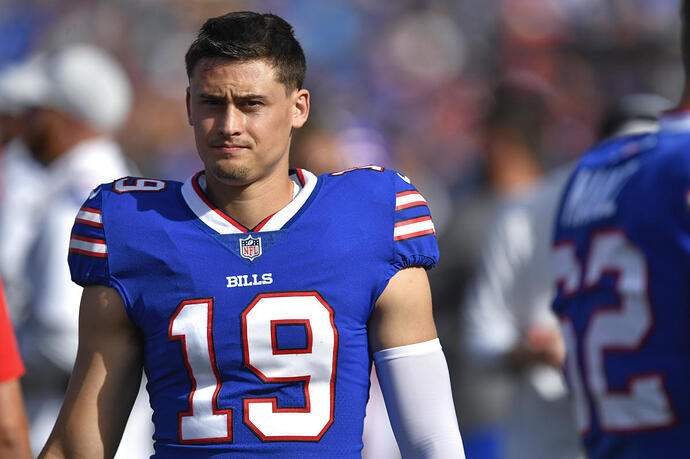 Damn… if true, go to prison for a long time

Unfortunately I’ve heard all kinds of these stories, seem these things… it’s crazy.

He out punt his coverage? Too soon?

For sure, they thought nothing would come of it probably. He’s not the first and won’t be the last

This, will be interesting in the coming days. Has Goodell let go of Jerry’s teet yet. I mean, damn…

If guilty, we send Fox in to whip his ass.

Bills said they investigated the claims. So they clearly didn’t think the accusers story was much to worry about.

It sounds like her attorney is claiming guilt because people in Araiza’s party asked her how much money she wanted. That is not an admission of guilt and he knows it but he’s going to try and leverage that anyways.

Her attorney is hoping they can settle this and I bet that happens.

If bills didn’t look into it
What are they doing with all that profit ?

How long did she wait to speak up??

Is this just the first you’ve heard of it ?

San Diego State has faced scrutiny after arecent Los Angeles Times report found the school did not properly alert the campus community of the allegations, instead waiting seven months.

Campus officials said that decision was due to San Diego police asking the school not to interfere with its investigation. The school agreed to comply with the criminal investigation and began its own investigative process in July.

Reading the allegation, it reads like He’s definitely involved
Hard to explain yourselves out of that one
Even if they try to say she was willing

Like Patricia’s incident
These aren’t regular situations that many of us find ourselves in and then facing allegations.

Reading the allegation, it reads like He’s definitely involved
Hard to explain yourselves out of that one

Especially considering it was a 17 year old. Always two sides to the story and probably neither are exactly accuate. But regardless this guy is a total d-bag in my opinion. And frankly I find it disturbing that the Bills would play it off so casually. I realize that a lot of football players are not saints. But at some point as a society we need to draw a line. How many of us have had 17 year old daughters or sisters. Rather than take advantage of them perhaps we could protect them. Instead of taking advantage how about putting her in cab and getting her home. Even if she begged him to have sex he is still a d-bag in my opinion. It only ended, however it ended, because of his bad choices.

It doesn’t matter, because California has an indefinite statute of limitation on sexual assault. However, the info was in the article.

“The accuser said she told friends she had been raped, then went to the police a day later and underwent a rape exam, the results of which have not been disclosed.”

The Bills said they knew about it. Apparently they didn’t think it was a serious enough of an accusation to warrant not signing him.

Clearly they looked into it and saw it as a non factor.

“We were recently made aware of a civil complaint involving Matt from October 2021,” the Bills said in a statement to The Times on Thursday. “Due to the serious nature of the complaint, we conducted a thorough examination of this matter.

The civil complaint is new but they knew about the incident and did a thorough examination.

How many of us have had 17 year old daughters or sisters. Rather than take advantage of them perhaps we could protect them. Instead of taking advantage how about putting her in cab and getting her home. Even if she begged him to have sex he is still a d-bag in my opinion. It only ended, however it ended, because of his bad choices.

She’s of legal age at a college party.

The guys a dumb ass but she’s no saint in this either.

One the saddest responses i have ever seen on a message board.

This thread is about football, not Kim Kardashian

She might’ve been drugged for all the details you have

And when this stuff comes up

How many guys do you know
Even at that age
Would actually want to do that and not think it questionable or you better be sure ?