Bills at Lions Preview--from the Opponent's Point of View

Good reading can be found here:

If the Lions play safe football on Thursday I don’t see any way they come out with a victory barring this defense forcing several turnovers.

maybe. But if they turn down FGs early, onside kick to start the game and still get beat down then they don’t just look like a bad team. They look like a sad bad team

I am with you that I at least want to see the lions be competitive for 4 quarters against the bills. On the other hand though, in Campbell’s eyes, does it really matter if we lose By three points or 30 points, a loss is still a loss.

There’s also a scenario where we pass on a easy field goal early, don’t convert the fourth and five……and with three minutes left in the game we get the ball down by nine

When it’s early, in my opinion, always take the points

I don’t understand how that is coaching scared?

it’s not. That’s like saying Blitzing is playing scared.

that the team you’re playing against is better

You’re answering your own questions.

Yes, odds are against the Lions, but until the game is played

It’s like a mini-version of our traditional offseason until the games are played. LOL

We are 5-6 in fake punts, not excited about anything else.

Which is more unlikely: The Lions beating the Bills on Thursday or the Rams being 3-7? Quick, someone post a “you mean we have a chance” meme…

We are 5-6 in fake punts, not excited about anything else.

*Because a ball from a perfect pass hit the dude in the hands and he dropped it. but if they come out flat they are going to get trucked.

goes both ways, this is a very important game for us.

I think the best path for the Lions to win is if Josh Allen’s UCL causes enough problems that he’s not able to be his normal self throwing the ball.

There’s going to be one helluva home field advantage Thursday, they better bring their A game, which lately has been missing

I think the main thing going for us is not only the short week… but a short week after buffalo was in chaos. They are distracted and had to fly back to buffalo quickly to help.their families… then are traveling back to Detroit. This may give us a shot. But unlike an over achieving giants team… we can’t beat this bills team straight up. If they are dialed in…they might light us up. But the fatigue… and maybe some trick plays, etc… maybe we can steal it. If I had to guess though… I think it still serves as a get right game for buffalo

This is the same team that lost to the Jets.

That was really good. Fair and unbiased. 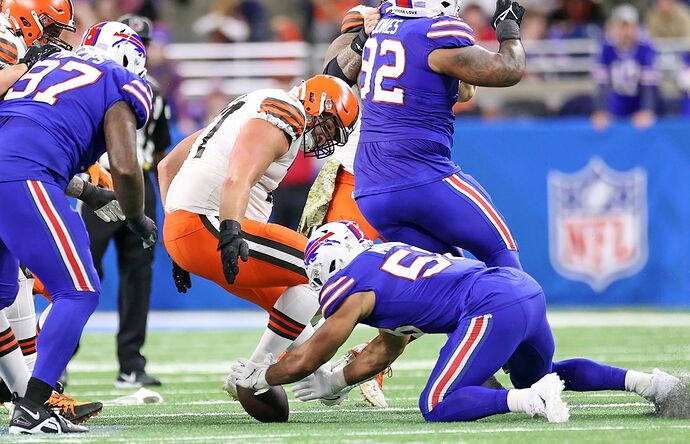 Bills have plenty to be thankful for following 31-23 win over Browns...

The Bills defeated the Browns at Ford Field and will return to their 'home away from home' on Thursday for a matchup against the Lions.