Goff perspective: if he was a free agent next season

Now, we have a pretty loaded offense (how could one argue right now)

You think Daniel Jones would crush it in Detroit right now?

No Daniel Jones sucks lol…I fail to see the point.

No Daniel Jones sucks lol…I fail to see the point.

Then I can’t help you. Good luck.

Why be like that? Why can’t you explain the point you are trying to make?

Does it make some feel better to try and make another poster look stupid?

Good points!
But Stafford’s QBR was that or lower 3 out of his first 6 seasons, so can you really say it’s just Goff that needs all those things to be successful?

I do think that McVay’s bending of the rules and calling plays in Goff’s ear when he was up at the LOS possibly hindered Goff’s development at reading defenses. Hopefully he’s getting better at it now though.

Absolutely not, most need a lot of help. And some can’t do it regardless of how much help they get. Goff at least has proven he can get a team to the SB with talent. But it’s also really hard to accumulate a roster as loaded as the 2018 Rams team was.

I think Goff is really solid. But can he win you a game that really matters? I’m just not so sure. If the game is on script, sure, I think he can. But if he has to play off schedule, I’m just not so sure he has what it takes. And I value that trait in a QB above pretty much all others.

I do think that McVay’s bending of the rules and calling plays in Goff’s ear when he was up at the LOS possibly hindered Goff’s development at reading defenses. Hopefully he’s getting better at it now though.

Peyton Manning spent some time on this. Its annoying and distracting AF. If a guy truly has no clue its a lifeline. But for any real NFL QB its just a distraction and something to overcome. The same is true for McVay’s under center playaction passing game. Any QB in that system is constantly turning his back to the defense and trusting that the playcall is right. Because a QB is vulnerable in that position and can’t correct the playcall.

I give credit to McVay and Goff for making the marriage work for as long as it did. Because they were not a match. Funny enough when Stafford came into LA, McVay changed his playcalling to things that better suited Goff than what he called when he had Goff. Just throwing that out there.

Your second paragraph I agree 100%

Its not the time an i know some will never change they want a new QB even if he sucks.

Goff for some is in no win position in some posters minds . We saw same posters anti Matt.

I think sometimes i watch a different game than some poster. I even have the Lion broadcast on radio an they are delayed . Yet i see the play an hard to believe but dan says same thing I seen 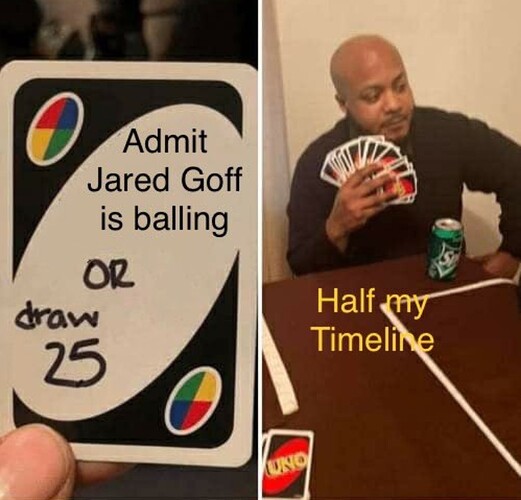