I was WRONG Goff deserves

To be treated as a quality starting QB going into 2022.
I am a forever fan, don’t post much, but love the knowledge this board is filled with.
About midway thru the year, I made up my mind. Goff was Joey part II, maybe worse. I’m not one that usually posts on my QB feelings. I did voice my dislike of Goff this year, not my normal self. You will never find a post from me on Stafford in all his years here, or on the trade. For the record, I liked MS but loved the trade considering the rebuild we were facing.
I did post on my dislike of Fields. I stated Mac Jones would finish 2021 as the top rookie in the class. I sometimes THINK I have a good feel for the qualities it takes to be a successful QB in the NFL.
I still have my doubts on Goff’s ability to go thru his progressions with the speed necessary to succeed or that feel of when and where to slide in the pocket, as well as some ducks and decisions he makes.
However, I am good with him going into 2022 as our starter. Not much different then most on this board. But I am surprised I am saying this. As most know, we don’t have much choice. But I went from feeling we are stuck with Goff, to, I’m good with Goff in 22 and have much higher expectations.
I still hope Holmes/MCDC find a QB they love at Senior bowl week, maybe find a sleeper in the 3rd round they can mold and grow as a back up.
Just my .02, so when I do have a positive take on our QB position, you will know, he’s earned my respect.

As a fanbase us lions fans have been at times over expectations on the lions starting qb and love the backup. What we learned from the pile of rubbish both starters and backups we have had in the past is that stafford changed our views somewhat. Its great that we can let goff succeed or fail on his own merit without the pressure of the fan base on him. We have evolved!

I’m not ready to just hand Goff the permanent starting job, but based on what we saw last year, both here in the second half of the season and around the league, we could certainly do worse.

Given his contract, he’s playing here next year regardless, and I’m fine penciling him in as the starter, focusing our draft and FA on other areas of the team, and not reaching to draft a QB in a bad year for it. If Goff looks like a legit playoff QB by end of next year, awesome. If not, we can use our extra picks to trade up and get the guy we want.

For the record, I liked MS but loved the trade considering the rebuild we were facing.

Same, my bro. Because of Matt’s age, and because of what I perceive Brad to be, I think we did very well in that trade.

I’m sold on the fact that there’s not going to be a better option to start the season. Without a major trade, Goff’s the best we can hope for. I love Pickett, but think he’s going 5-15 range. It’ll take a major move up. (I don’t believe there’s chance in hell for a trade down)
I think we’re bringing in another guy though. Have to hope for lightning in a bottle type mid round pick, aka Russel Wilson, which is just to damn unlikely. (Ridder maybe?)
I don’t fully trust Goff, but with what our OLine and running game “should” be, he has as good of a chance as any to win the required amount of games for PO contention.

I’m in favor of keeping open the open of taking a QB 3rd round or later if one drops. Our back up QB situation isn’t the best and having a guy that may develop into a starter or even quality back up is a good thing to have on the team.

Serve me up some of that crow…there were a few weeks I was completely off the Goff train.

I was probably Goff’s harshest critic. I’m glad to see him finally step out of his own shadow toward the end of the year and play with a little more assertiveness. In the end, I thought he played like he was supposed to when we traded for him. But that doesn’t mean he is the QB of the future in my eyes.

I might favor him though over most of the guys I see in the draft this year.

I said early on, he could win playoff games with a good team around him … because he has.

All of these can be accomplished, and make him significantly better.

I’m fine penciling him in as the starter, focusing our draft and FA on other areas of the team, and not reaching to draft a QB in a bad year for it. If Goff looks like a legit playoff QB by end of next year, awesome. If not, we can use our extra picks to trade up and get the guy we want.

This is exactly where I am at. There’s pretty much no risk and a ton of reward to punting on the QB decision this year.

I was probably Goff’s harshest critic.

Sit down, that’s me.

Everything @REMRebound is how I feel. We could be far worse, and '22 is fairly inevitable anyway. He certainly did enough not to warrant me not panicking, but I remain far from confident in his ability to lead.

And frankly, I don’t think Dan is sold on him either.

That said, if his play is as consistent as it was in the second half, and the team wins games, then it’s a different conversation. If he’s the QB of another disastrous start to the season, he needs to go, and if it’s really bad, Dan should go along with him.

That said, it’d be great to see them nab a QB this draft if someone falls, or if they feel really good about the Senior Bowl cast. I don’t mind a QB at the end of round 1 if they did their homework and understand he’ll sit for a year.

is play is as consistent as it was in the second half, and the team wins games , then it’s a different conversation. If he’s the QB of a

I came in sorta blank slate on him. I was hoping he could be like an Eli Manning sort of thing, for us. Maybe he can. I was really losing faith in him for awhile there, and still am undecided, but was ver thankful for the improvement late in the season.

I challenge anyone to find 10 QBs that could have done more with what he had to work with since Dan took over play calling.

Answer is you can’t.

Build the team. Holmes has shown a keen eye.

According to pundits there is no great QB in this draft anyway.

Ride or Die with Goff.

And frankly, I don’t think Dan is sold on him either.

LOL, I was a little suspicious about that behavior as well.

I was told that no one on this board agreed with that opinion when I said that was my preference.

I still feel not lining up the future answer at QB in 22 means we don’t see meaningful games for a long time.

The door has creaked open on the idea Goff may be that guy in my mind, probably late to the party there.

The team is still a long distance from having enough talent to compete for a playoff spot let alone a championship, and if Goff IS the long term guy, it means they have to add that talent without the $20M in cap space between Goffs 23 and 24 cap numbers and what a rookie QB deal would be. That’s a lot.

If they dont go QB in 22 and Goff isn’t the answer, then 24 is the earliest they play meaningful football. Best case… could be 25.

Goff being “The Guy” could shorten that to 2023…but again without $20M worth of supporting talent.

Like you I want to see what he does next year before we commit. I was pleasantly surprised how good he looked at the end of the season. He seemed more relaxed and confident. He was navigating in the pocket to avoid the rush. He wasn’t doing that the first half of the season. If he can continue to play loose and keep developing I have no problem going forward with him as our qb1. I actually really hope he does. I’d love to use all our draft picks on positions other than quarterback.

So, if you have to line up the future answer this year, who would that be? And the money we will be paying is closing in on average pretty fast. Sure it’s not what you’d pay a rookie, but you have to ask yourself why the Rams cut him that contract to begin with. They weren’t under the gun, but they thought he was their guy and quite frankly maybe he was. The fallout comes and he’s dead man walking. How many playoff teams are going to be spending less on a QB in 2023? Get rid of the shit contracts, Flowers this year and Brockers in 2023. Lions led the league in dead cap this year, nothing like paying guys who not only aren’t playing, they aren’t on your team at all. 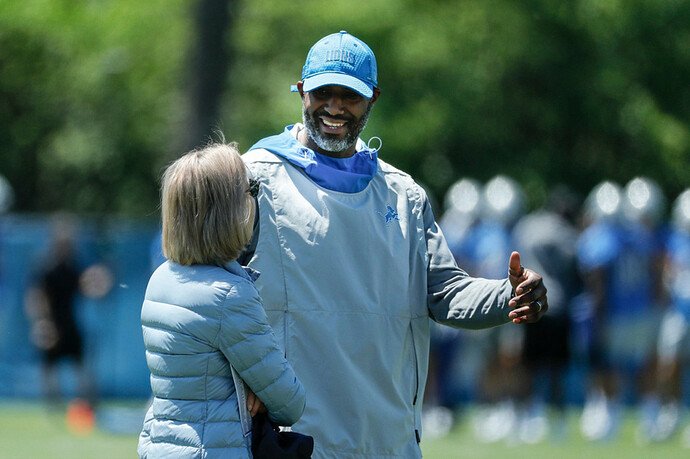 In comparison, 20 other NFL teams carry less than $20 million in salary-cap costs.

That means Corrall and Pickett are probably gone.

That means Willis or Strong? Sorry, Ridder looks like crap to me.

I don’t even want to spend 27 really on a guy like Willis or Strong.

So if either is there at 34, I think hard. Otherwise, you go into 22 with the belief that Goff has half the year to show He Is The Man.

If that fails, trade him right then. Sweep up your beans and go big in 23 in the draft.

None of this is a great plan. It’s just the SOL luck, because if a Herbert or Burrow was there at 2 this year, it’d be a slam dunk.