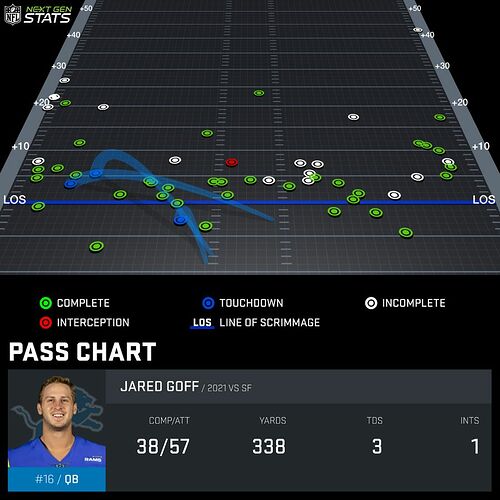 Seems about right from what Rams fans described. Going to draw a lot of defenses up closer to the line, though, which will hurt the running game.

Seems about right from what Rams fans described. Going to draw a lot of defenses up closer to the line, though, which will hurt the running game.

Are those green things good?

Goff was not impressive yesterday (until SF switched to permanent prevent D), but I’m willing to give him some latitude. He played in one preseason game with a new team and new offense before yesterday? I don’t think he’s returning to the Super Bowl any time soon, but I think he can be better than what he showed yesterday when he gets a little more comfortable with this scheme and players.

Hard to kill him with not having a single WR anybody is afraid of. The Lions have the supporting cast but nobody that is going to require a double team. Pretty hard to push the ball downfield like that.

Eh hem, that’s no way to act on a Monday morning.

OK, tell you what: I’m officially revising down my win predictions for this year from 3 to 2. Better?

I’ll be happy to be proven wrong, but I’m looking at our schedule and not seeing where three wins are supposed to come from. (Honestly having a tough time seeing two, but the NFL is a weird league, so we’ll probably pick one up somewhere. Projecting 2 is me being an optimist.)

The thing that stood out for me was that Goff looked slow at processing coverage and slow when running the naked boots… like watching paint dry.

Yeah, it’s really going to take one of those opponents becoming less that we expect than it is the Lions actually beating a good team.

The thing that stood out for me was that Goff looked slow at processing coverage and slow when running the naked boots… like watching paint dry.

Yes, he did look painfully slow in terms of processing what was happening on the field. But that’s the part I’m willing to attribute mostly to discomfort, just getting used to being in a new place, a new scheme, new personnel, etc. The guy did lead a team on a super bowl run and did step in to win a playoff game last year.

Maybe Goff is a total bum and you can chalk that up entirely to Sean McVay, but I think he’s better than he showed yesterday and will be better as the season goes on. Maybe not good enough to prevent us from taking a QB when we pick first or second overall next spring, but better than yesterday.

Goff was off a bit but minus a couple plays I thought he handled the mental part well. He’s an accurate QB. He’ll be better in that regard most games (IMO)

Watching the afternoon games walked me back from the edge. Lots of QBs playing like Goff, including Rodgers in week 1.

I don’t think he’s a bum, he’s a game manager. He needs a top defense and a lot of weapons around him. I’d love to be proven wrong, but that seems to be who he is and why the Rams gave up so much to move on from him.

The 3 best WR’s on the roster are Hockenson, Swift, and Jamaal Williams. Raymond is probaly the 4th best wideout on the team.

I think context matters. It’s not like Goff had a ton of time to let the plays develop. There were a couple of deep passes that we didn’t connect on but those should get better as the season progresses. I assume the game plan was to get the ball out quick to help the oline vs niners dline.

“Alas, aggressive architecture doesn’t always build a sturdy house. Jared Goff was largely timid at quarterback, a quality that cannot be a building block. Of his first 43 pass attempts, just two traveled more than 15 yards down the field per a FOX broadcast graphic”

If you go back and check, I did mention a few times leading up to the regular season that our best recovers may very well be our TE and RBs….

I am hoping this gets better with regards to the actual WRs catching more passes….