Not sure if that counts as “winning comfortably” or “winning big”

For some reason I’m expecting the Vikings to press (on offense) and commit mistakes. Due to Vikings turnovers, we’ll eventually build a comfortable lead.

I just see us frustrating them into mistakes.

Teams have, for some reason, been playing their worst ball against the Vikings. They have an incredibly low DVOA for a 10-2 team. The Cowboys exposed them. Hoping we sic our rookie DE’s on them and it turns ugly, but if history is any indication, we are going to make mistakes too. Thats why I voted for a close win. An ugly 27-23 win.

I want to kill em…but it’ll probably be a really close game, hopefully we can pull if off at home…the place will be rocking

There sure is a lot of confidence for this game by our fan base and even Vegas.

I definitely think its possible. With just a little luck healthwise we beat the Bills. But the Vikings have some weapons. We just have to hit the gas and not look back.

Dan Campbell is also 3-0 as Lions head coach against teams 5 games or better above .500.

Patricia, Caldwell, Schwartz, and Marinelli didn’t win a game combined against a team 5 games or better above .500.

Not to worried. Had them beat until…well, we all know.

Don’t think this will be a cakewalk. If we win I think it will be by less than 3.

Dan Campbell is also 3-0 as Lions head coach against teams 5 games or better above .500.

Great stat, but that includes the game the Packers rested Adams and Rodgers in the 2nd half last year and several other starters. So, it’s more like 2-0 in my book… I’ll take it though, time for another one this weekend

Cook gets us for a big TD run and JJ gets his numbers, but they cant stop us. We score 44 but there’s a red zone turnover and Money Badger doinks one from 57.

Swaggy Wright Sun God and Reynolds get the TDs

I think we win it because we have to and we need it more than they do.

I think this game is a close one.
Lions win

Lions take 3 score lead and cruise the rest of the way. Jefferson goes crazy late in game as Lions play prevent defense making score look much closer than game is. Lions have to keep their foot on the gas as Kirk Cousins has been comeback Kirk this season.

Vikings win 33-6. We get manhandled. Every single f’ing time I’ve ever been confident in this team, they’ve immediately Dominatrixed me in the balls.
Let’s go with the reverse psychology.

A close game is consistent with recent history between the two teams:

Thought maybe here was a good place for this 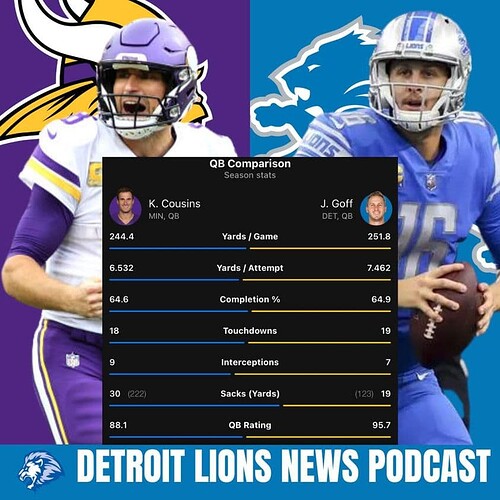 Thought maybe here was a good place for this

This is my hope! We win because Cousins is constantly under duress while Goff lights up the Vikings secondary.

Vikings win 33-6. We get manhandled. Every single f’ing time I’ve ever been confident in this team, they’ve immediately Dominatrixed me in the balls.
Let’s go with the reverse psychology.