Idk but if he keeps hitting on draft pics like the last 2 years he might not need FAs. Lol

This is how I feel too. This could help us to have a HUGE window of opportunity in the future…bcause it keeps the cap down.

I find it strange that anyone would attempt to defend Matt Patricia. Arguably, he was a worse coach than either Mornhinweg or Marinelli because he had far more talented teams who barely performed better

Once Stafford asked/demanded a trade…. Immediately 30M in negative dead cap hits were the result.

So we had to cut anyone we could just to break even with the cap, and I think we can all agree the likes of Golladay, Jones and Collins weren’t the right guys to pay or keep paying….

We had 6 picks and ZERO money in 21’…. Patricia inherited a playoff roster and progressively
Add it worse by getting “his guys!”

21’ - Holmes took out the trash and DC had a pretty talent devoid roster to coach.

22’- more draft picks, and a tiny bit of money and my gut says we double our win total from last year.

23’- more high draft picks than any time I can remember, and plenty of money.

By next year we should be back to Schwartz days talent. Then it’s on DC

This is hilarious too! My wife tells me this regularly, and when I do it… I have the time of my life shortly thereafter.

This is hilarious too! My wife tells me this regularly, and when I do it… I have the time of my life shortly thereafter.

That Patricia squad was the equivalent of an all senior and junior team winning 5 games at MSU…. The DC squad is like a 4-6 MSU team that is starting almost all freshman and sophomores.

One team borrowed from the future to buy bad veteran FA contracts.

The other has been paying for the sins of the previous regime, while growing up from pups, and likely winning more games.

How long has it been since the Lions did something like this? Consider this: They have only player left from the last time they won four straight games, way back in 2016, which also happens to be the last time Detroit made the playoffs

And Taylor Decker is starting to get that feeling again.

“It’s been a while since there’s just been this much positivity around the building,” the veteran left tackle said. “Three wins might not seem like a big deal, but it is. You can go out there expecting to win. Playing with confidence leads to winning, as opposed to maybe guys go out there not being sure because we haven’t had success. But I remember my rookie year (in 2016) especially, we were on a roll in the middle of the year, and we were winning all these games with 2-minute drives at the end of the game, and we were always like, ‘We’re just going to win the game. Like, that’s what we’ve been doing.’” 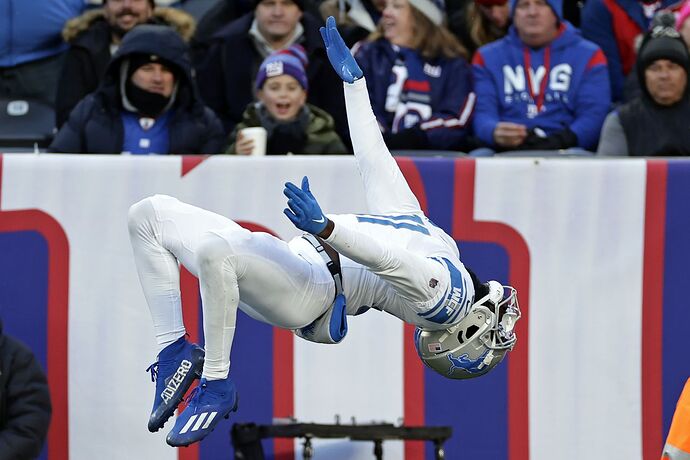 The Lions have soared onto the outskirts of the playoff chase. Against Buffalo, they can prove they are for real. damn your mind is like a steel trap, mine sucks !