Didn’t see it posted yet… 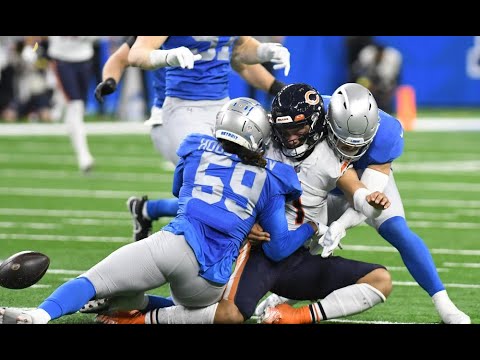 There is a lot to like on the slowlights.
I kind of watched the game quick because I had to watch it on DVR after work. But watching the little details show these young tuys are really making improvements.

First off… Brock Wright and James Mitchell are already better blockers at TE tham Hock was here. They both made keys blocks on the last play of the Slowlights video… Swaggy’s long run.

Here are some interesting pics I noticed….

Mid way thru 2nd quarter… Swaggy got a 13-yard catch.
Here is why he room to run….
Jamo and ASB run vertical routes from a stacked alignment…

Then… this a Brock Wright TD catch…

Be honest… who thinks Hock could have and turned upfiled ran well enough to not be caught by Brisker???

Here’s the strip sack… look at how he turns and gets back up field to close that gap!!! Houston ran 13 yards in a hurry to get the chop on the ball.

And his sack when he dropped in coverage… wow!
Houston went from the 34 yard line in coverage…
to hitting Fields at tue 21-22 yard line!!!

ooooohhhhh weeee!!! that is closing burst!!!

Is the Hutch INT play.

I realized the Lions were covering the sidelines…
but how about that pass rush?

Good call by AG… as long as a team doesn’t have a hail Mary called… but given the clock situation and field position… it worked great.

The way Houston closed on Fields and got the strip sack was impressive.

Obviously Fields had no idea the problem was behind him, but Houston can absolutely cover ground better than any Edge we have had in years.

One of Hutch’s few weaknesses is he is pretty slow … he will never catch a running QB. He just doesn’t have foot speed. Houston can flat out move.

Love seeing how plays open up with the slow highlights

I’d be curious to see the GPS dats from Houston on those 2 sacks… his acceleration was outstanding.

This is another reason I thought a little bit about Elvis Dumervil as a comp on outside rushes… because Dumervil didn’t test all that well in the 40… but his speed to power was impressive.

One thing that was impressive on multiple of those sacks and hurries was that you’d have a guy like Hutch bulling his way back into the qbs lap, which wouldn’t get fields down on its own, but then you’ve got paschal or Houston winning on the blind side and getting home. A lot of complimentary efforts, closing in the walls on fields. A few moments of “I need to get the **** outta here.” Almost felt bad for the guy.

Crazy to see the contrast, week over week, from Carolina to Chicago. A lost defense vs a dominant one, all with the same cast. A confusing team to watch.

I saw that too. Just goes to show the 40 time doesn’t always correlate to closing speed. Houston closes like a rocket compared to Hutch.
Hutch does other things well, and has to consistently stand up to double teams, so not taking anything away from him.

As much slack as Swift has rightfully gotten, he looked really good in this game. He patiently followed his blocks and then made things happen when he ran out of blockers.

I’m not sure anyone thinks he is “slow” for a DE or edge player.

On the other hand… Houston showed closing burst that was eye opening… and though way too early to make big statements…
that closing burst looks pretty special for this small sample size.

I’m not anyone thinks he is “slow” for a DE or edge player.

@thunderbuzzworth explicitly said his weakness is that he is pretty slow, i was referring to that comment.

And as far as the comparison goes, Houston’s center of gravity is going to be naturally lower, plus his height and weight are going to make him naturally more nimble.

Is there any more accurate passer than Goff at the moment? The first pass to ASB in that video was a marvel of quick recognition and incredible touch. I can’t thank Boy Wonder enough for kicking Goff to the curb.

He’s had kind of a quiet season statistically, but I noticed McNeill getting double teamed, both on paschal’s first sack and on Houston’s sack/fumble. Also he was playing some big DE. He’s been a valuable piece of the DL

Noticed on the fields strip that Houston was doubled and redirected well behind the pocket. I wonder how many guys in that situation say welp, not this time, and watch the rest of the play. Houston doubled back and sprinted ten yards to make the strip. Awesome effort.

Maybe a Michigan thing, but there almost seems to be a weird subset of Hutch guys that are a little defensive regarding comps with Houston. There needn’t be. We’re blessed to have both, and they’re very different players. A big, well rounded defensive end who is a solid rusher, run defender, and can even make plays in coverage. Houston being more like an over sized linebacker with a serious knack for getting after the qb.

Hutch is doing what was expected. Houston? Particularly exciting because it’s potentially the defensive equivalent(as close as it can be) of drafting Tom Brady in the sixth round.

When I rewatched that screen play to Raymond, I couldn’t help but wonder how that turns out if it goes to Jamo. Maybe next game

I agree with you… Jamo might take that to the house. He has such sneaky acceleration, I think it’s sneaky because he starts off fast already and doesn’t even look like he’s running that fast. That reverse was a great example. I still don’t think he hit top speed on that

When I rewatched that screen play to Raymond, I couldn’t help but wonder how that turns out if it goes to Jamo. Maybe next game

Jamo has an edge on long speed… but not sure that screen turns out much different.

That Hutch pick play was one funky ass weird play!

You never see 2 of our defenders the entire play…where were they? You only see 7 at the snap.

Part of it is camera angle, but Hutch essentially came off the sidelines…it’s almost like the Caldwell Disaster set reborn, except it mind freaked Fields…he never even looked anywhere near where Hutch would have been in his Field of Vision…and it’s like to Fields Hutch just appeared out of thin air…

A veteran QB would have seen that and called some kind of QB rush up the middle with a convoy of 5 blockers…yikes! Than again, that D set never gets shown to a guy who can think fast, which is not Fields at all.