What is going on with Goff?

is it the WR’s , is Goff trying too hard? , I watch his games and I can’t figure out if Goff is having a issue making his reads, is he NOT seeing things, IS IT our OC…it’s so slow and mechanical…worse, we barely get anything done. It’s like watching slow-motion football. I sit and wonder if we wouldn’t BE winning if our back-up QB was in instead sometimes…It’s weird watching our play…almost like nobody can think/remember their jobs half the time.

It’s either coaching or the players just straight blow.

I think its a combo of both.

It’s just mind boggling that these guys make this much money and looked like a high school D grade offense.

Goff is broken. He doesn’t believe in the system. His receivers suck sans Hock. His tackles aren’t protecting him.

He’s wondering every play who is gonna miss their assignment. Am I gonna get blindsided? Is Swift gonna pickup the blitzing backer? Is Raymond gonna run the right route?

I dunno…I’m leaning towards coaching being the issue.

Anthony Lynn is not good. I tried to tell you all.

It’s a combination of both.

It’s either coaching or the players just straight blow.

Wait?..didn’t it used to mean Stafford sucked, based on your own analysis?

I think its a combo of both.

It’s just mind boggling that these guys make this much money and looked like a high school D grade offense.

Shouldn’t the QB be able to overcome?

He’s wondering every play who is gonna miss their assignment. Am I gonna get blindsided? Is Swift gonna pickup the blitzing backer? Is Raymond gonna run the right route?

He’s trying to build a repore with short, practice squad guys who would be starters if they knew what they were doing/had talent/experience.
Oh yeah, Goff is under pressure. He’s trying to save his career with a bunch of never will be receivers and a rookie, while taking the blame for their inability.

good stuff…it’s always a thing of 3 or 4 different little things that kill. Been that way since WCF purchased The Lions’ .

To be fair, no quarterback in the league could make this current team a winner.
As for Goff, he’s just not a good quarterback. I was surprised when he got drafted at number one over all and even more surprised when LA paid him all that money.
He just plain and simple can’t read progressions. Or won’t. All he seems to be able to do is pass to the number one intended receiver. Usually the one closest to him and that’s usually the running back that’s either at or 2 to 4 yards past the LOS. You know, the one he stares down after the snap. He isn’t even looking at anyone else. I said after they got an extra number one pick to take him that he was only a stopgap QB that would help them get top 5 picks for two years. After they draft a QB-he’s gone. I don’t see the Lions getting anything for him so he’ll probably just get cut. Sorry, but that’s the way this old guy sees it.

you can recover gold if you have enough time, money, experienced workers, & equipment -in the right area/with enough water.

They assembled this team. make it function !!!

Quality players are needed. Can’t win with everyone else’s cast-offs. It’s going to take a couple years. This staff inherited a horrible team with shitty players. It took Quin and Patricia what…3 years to assemble this mess. It’s gonna take at least that long to recover. They should be better next year(maybe 5, 6 wins) and MAYBE competitive in 2023. Hopefully. Don’t expect much until then.

McVay got to the playoffs and a Super Bowl with Goff.
I’m sure that was 100% McVay, though.

I’m sure Goff did some stuff, but saying he ‘lead’ them to the super bowl well, that’s a stretch.

If McVay could win with Goff, so can Campbell/Lynn.
The question is, why aren’t THEY?
Goff is a known commodity. He didn’t turn to shit because he came to the Lions.
He turned to shit because he has a shit team around him now.
Is he perfect? No.
Is he ever going to be the next Aaron Rodgers? No.
Is he a proven winner. Yes!
Until he came here.

Have to slightly disagree. There was several reasons McVey wanted to trade Goff 2 1sts and a 3rd for Stafford.

Those reasons have been pointed out several times.

McVey still says he could have and wishes he’d have done better. He shoulders some of the blame. However, no one gives up what the rams did if they don’t believe they are making a serious upgrade.

I do think he can be part of the answer here. He needs to find his confidence, he needs the right OC, and he needs talent around him he is sorely missing.

This roster was purposely assembled to win 0 - 3 games this year. The Lions needed to get better control of the salary cap and start the influx of good young players. They are working the plan. As shitty as it is we have to be patient this year. Next year we can get the nearly useless Tre Flowers contract off the books and start bringing in free agents and talented high draft picks. As was said above, we are being constructed to be competitive in 2023 and beyond. Short term pain for long term gain.

did not say that, I said our “so good” staff made the team, supposedly with everything they could-in hopes to be competitive and win, correct? So where are the wins?

It’s pretty simple to me…

Goff was brought in as a veteran with a good attitude and a cut friendly contract after 2 years.

We are an NFL record FG, and a barely NFL level kicker making back to back 54 and 55 yarders from being 2-3. Would those super unlikely FGs missing change what we are? No we’d be a 2-3 team that is no threat to win a playoff game.

Stafford has proven to be a 4-10 win QB throughout his career here. He had 8 wins and 59 losses against winning teams HERE.

WE ARE MISSING OUR 2 BEST OL PLAYERS AND OUR TWO MOST TALENTED DEFENDERS FOR THE YEAR!!!

Stafford never once played on a team this talent depleted. Ever!

Stafford is better than Goff, quite a bit better as it turns out…

Doesn’t change the fact the Stafford wanted out. That we had purged our roster with moves like Golladay, M Jones and others.

LOOK AT OUR CURRENT ROSTER SALARY CAP PLEASE!!! We have like 100MM in total cap usage on our active roster!!! We have 55M in dead cap and another 34MM in cap hits on IR!

Maybe we let our borderline pro bowl LT play LT, our top draft pick who clearly is better at run blocking than managing the blindside moves to RT, our All Pro center comes back, and hopefully J Jackson makes a tiny bit more progress….

We are seeing production from Julian O, Bryant, and C Harris, so getting Romeo back gives us at least average edge play WITHOUT Flowers…. Saves another 10M in cap instantly.

DE/DT - Larry Ogunjobi- nice inside out player with 3-5 sack potential from inside. Length to play 5 tech. 3 years 28M

These guys will count 30M against the cap next year…

Not crazy to fill 2-3 more holes in the draft

Resigning walker as a blitz Nickel, backup FS or SS would be great.

We likely win 8 games with that roster

Lawrence and Burrow look the part of true franchise QBs with some mobility and solid arms. Murray was the same type of home run or strikeout risk L Jax was.

I would love the above off-season and ability to trade from 10-13 up to #6-8 by including our other first. We’d have a complete roster, cheap young stud QB and full allotment of picks for 2024.

Most teams who build a roster and then move up for a QB have to mortgage their future picks. We won’t!

SEVEN OF THE LAST 14 QBS TAKEN TOP 5 ARE NO LONGER ON THEIR RESPECTIVE DRAFTING TEAMS JUST 8 YEARS IN! Opposite of franchise QBs

Bottom line you can’t chase a franchise QB, let it happen. Draft and sign the best players you can, and guys like Case Keemun or Teddy 2 gloves can win 7-9 games in this league. Or more

And yes…Stafford still and always will suck.

Can’t wait for him to blow it in the playoffs.

I will be the first to say I told you so.

Guy is a worthless quitter.

This was a Goff thread. Thanks for derailing it.

Oh and your gaslighting shows that I am getting under some skin.

We get it. Some of you think Stafgod is a diety.

Resigning walker as a blitz Nickel, backup FS or SS would be great.

This will probably sound like nitpicking, but Walker is having a very nice season with this new staff. 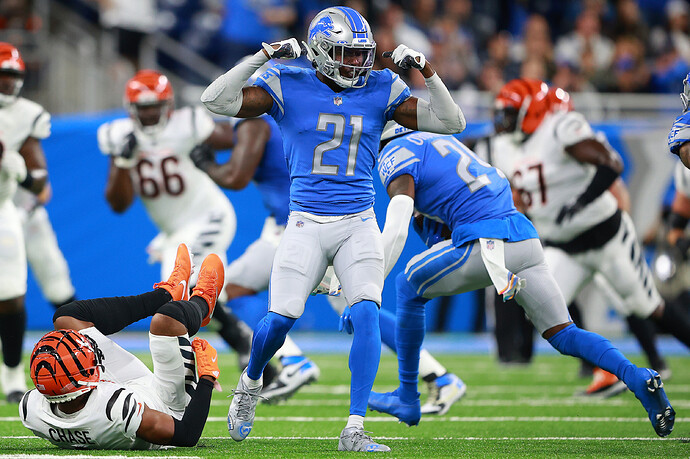 What should the Lions do with Tracy Walker?

Tracy Walker is playing the best football of his career so far this season, creating a potential quandary for Lions general manager Brad Holmes. Over the c...