Hock not being the difference either way and lions have a bunch a draft picks and a young team So they can afford to over pay some of their own.

If lions had been winning I don’t think they make moves to subtract talent at player or coach. If anything they’d have added if they’d been winning.

Except for the Levi pick.
I wish I was in his head on that one. I don’t get why you’d take a DT with a back injury that early…but it seems to have worked-out with Tevon Jenkins in Chicago.

Oh well, can’t win them all I guess.

Yeah I still stand by that was a bad pick, and it was in my book. But he sure hit on a lot of others. I still think he can grow more in this job, but his drafting has been good.

He can (and I hope will) grow into his job (some will argue this has already happened, but I am not in that camp yet). The foundation is getting built and hopefully there will be more to come in the next draft. That draft, his third, should be the one that pushes us into playoff contention with Goff and hopefully we are drafting a potential QB of the future this go round as well.

Sure, he is going to miss on someone every year. But his picks are blooming and is a great sight to see.

Slice the stats however ya want… everyone can see how much better those guys are than Hock. Kelce and Andrews can actually run after the catch.

Not slicing any stats. I presented them. They are self-evident.

Hock’s yardage per reception is in line with the leaders. Meaning he is also running after the catch.

A lot of factors go into the stats. Kelce also has Mahomes throwing to him.
My main point is, Hock is not nearly as bad as some are making him out to be.

Now resigning him for a hudge contract was a bad idea because this offense doesn’t utilize the position to spend that kind of money.

But that is exactly what we were going to have to do. So you go “can we go deep in the playoffs with this team?” If the answer is no (it is) then you have to make the move or lose him, hope you don’t cancel him out with a high priced FA (we should) to get the Comp bean. Now the beans are in house and we’ve won 3 in a row without him. Our TE touches have been few even though we haven’t had our full complement of receivers. This IMHO is proof positive why for THIS offense, it would be foolish to invest highly in ANY TE. Our #3 WR will get more touches than our #1 TE. When that is what you do, you don’t sign any TE to a 10M plus contract. I’d have preferred a non-division opponent to send him to for sure, but no ra-grets.

Thanks for the alley-oop, mouse

for what it’s worth…I’d bang her chest lol.

Slice the stats however ya want… everyone can see how much better those guys are than Hock. Kelce and Andrews can actually run after the catch.

Not slicing any stats. I presented them. They are self-evident.

Hock’s yardage per reception is in line with the leaders. Meaning he is also running after the catch.

He has 2 catches this season that skew his stats for this year.

A more in depth look doesn’t support your stance… 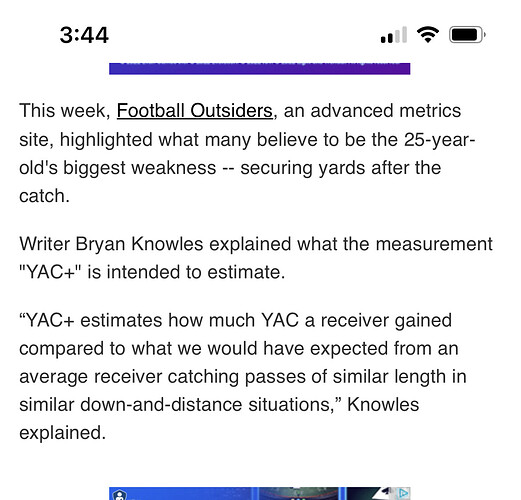 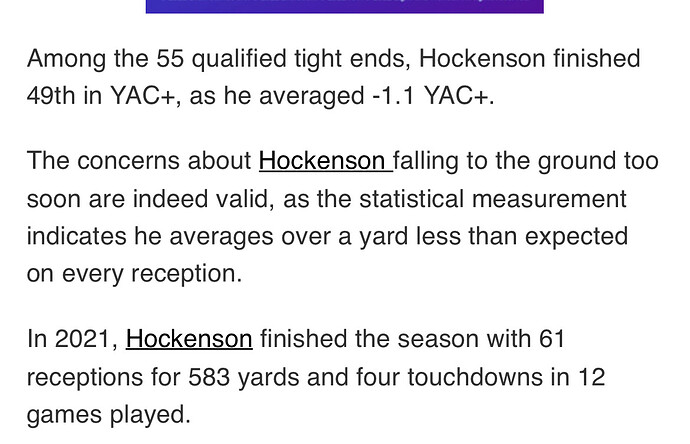 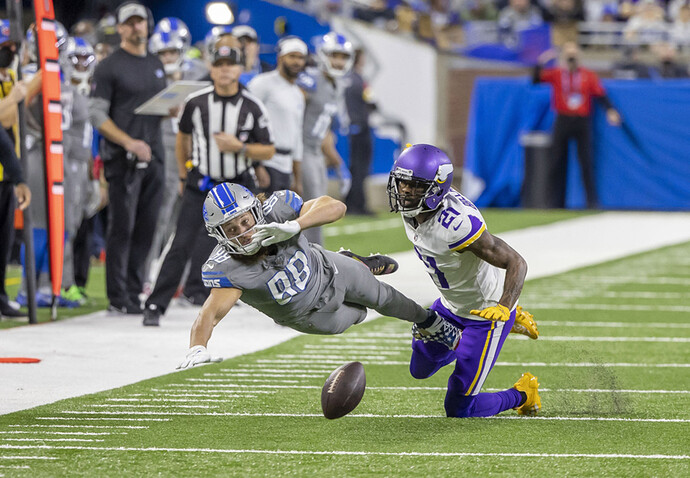 Tight end T.J. Hockenson must find a way to earn more yards after the catch in 2022.

I don’t think the book is quite yet written on Levi. He never really rested his rookie year and tried playing through this back issue. By the time he comes back from it he will have had 9+ months to let it heal right. I know backs can be tricky so its possible it will never be right, but I’m gonna take a wait and see approach. He really was a talented interior pass rusher coming out.

With that said, we need to move forward expecting nothing from Levi. Campbell and Holmes need to address the DT position in the off-season and anything we get from Levi is a bonus.

I personally really wanted JOK. I had Moerig, Asante Samuel, Terrace Marshall, and Rondale Moore on my best available as well. I liked Levi, but I was off DT once Barmore was selected with what else was available.

Its what The Den does

The results of that trade won’t be known for well more than 2 years.
It’s gonna get plenty more attention.

The results of that trade won’t be known for well more than 2 years.
It’s gonna get plenty more attention.

I declare we won.

Re-allocation of salary to the D-Line alone…watch’n’see.

If the crowd at Ford Field is the 12th man…the Vikings GM has to be considered the 13th!

Hey TJ did fair for us, who cares if he’s gone and is not doing so hot on another team, maybe he’s not happy where he’s at . our focus should be on beating The Bills, and once again we better f’ing BRING IT to this next game-again or we’re going to lose. we can’t make mistakes or play too sloppy or our streak ends.

Hock was not going to be resigned so taking what they could for him was a decent move. Wright, zlystra, and Mitchell have more years left at a lower cost and will likely out produce him as a group moving forward.

Even Holmes probably didn’t think the Lions would win 3 in a row so making the trade was a very future forward move.

As to Levi, His book is definitely a stinker so far, but he has one more year to turn it around. I feel like he was the thibs pick in the sense that Levi’s ceiling is VERY high but as we’ve seen his floor is rock bottom so far. Holmes was looking for a game changer on the DL in a year where there were very few top ones. Getting Mcneil was the safe bet and he doubled down luckily.

The rams fans are loathing their last 2 draft classes. They got one outstanding linebacker and not much else. I think the Lions were lucky to get Holmes and Agnew based on everything I’ve seen so far from the Rams and Lions the last 2 years.

Lions defense will be too complex for him, useless player

Its what The Den does

Look at the thread title. A discussion and sharing of opinions and facts is literally what these types of boards are about.

Minnesota has had a couple real stinkers running the ball since TJ has been there.

Cook won’t be sending TJ a Christmas card this year.

Less than half of the ypc

BUT I was also frustrated, because he was one of just a few guys who were actually making some plays at the time.

This!!! It was all about timing.
You’re playing your Return Man, and PS receivers in the next game, and you trade your top 15 TE, and really didn’t get good value.
Wright, Zylstra, and Mitchell seem to be up to the task, though.

This is never the wrong answer