How is this possible with a horrible QB?

Exactly! Every year until you have a winning team.

everely behind in the Patriots

And we were in scoring position enough to have made a game of this but passed up on about 5 FGs by going for it on 4th down.

Some folks think its easy to replace/upgrade from the 13th rated QB.

It’s also hard to deny that the revolving door of injuries at WR has lowered Goff’s QBR from where it would be. How many dropped TDs have we seen this year?

We also won the Giants game without a great game from Goff. I mean he didn’t even have a passing TD.

But if you watched the game you realize how ridiculous that statement is. Cabinda dropped a sure fire TD and multiple other players took their passes within a yard of scoring. Goff got them in scoring position on those drives just as much as the running game, and it was a bit of a statistical anomaly that he didn’t have a couple of passing TDs.

Goff has never been a stat hound, your RB leads the NFL in TDs

Just win baby, that’s what he’s all about

Tomorrow is going to be insane, Bills mafia be damned, Ford Field is gonna be rocking, and if at some point Billie Jean is played and the games at hand, the place will go berserk

I think this is Ben Johnson being great at his job, and we lose because our D stops no one (until recently).

He did not have his best game.

BTW I see a lot of Goff fan getting defensive about Goff.

My statement wasn’t about Goff’s abilities.

I’m simply saying we won the game by being more physical than the other team. And the Giants are pretty physical. We smashed them in the mouth.

everely behind in the Patriots

And we were in scoring position enough to have made a game of this but passed up on about 5 FGs by going for it on 4th down.

Not quite 5…… and definitely not early enough to matter.

They passed up only 1 FG before the 4th quarter… and the score 19-0 at the time in 3rd quarter. It would have been a 51-yarder.

The Jets should have listened to you. There was lots of chatter about what douche Zach Wilson is before the draft.

Actually, they did listen to me. I thought he was the 2nd best QB in that draft… But as I always say, the teams have way more access to the real insight into guys’ character than we the fans do. I haven’t followed him much since he got drafted but his numbers aren’t too good. Not sure if it’s something he can eventually overcome or not. If he is a douche, then it’s the scrap heap for him eventually, as is the way of all douche QB’s.

Oh…. right… how could I forget about Goff’s fumble six in the 2nd quarter???

The FG they passed on would have been 50 yards…
and Badgley had made 3 of 10 from 50+ yards in his career before that game. 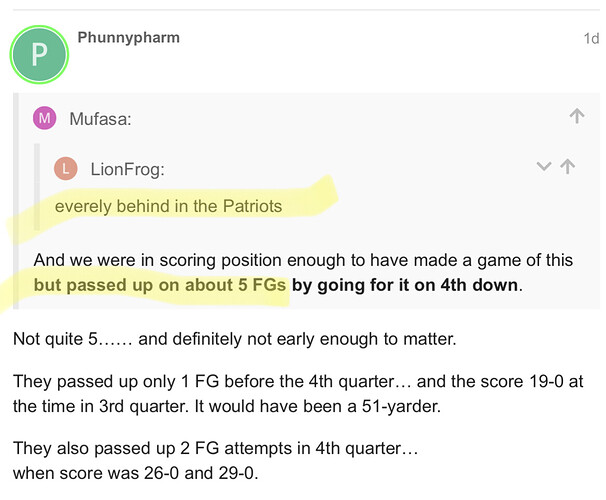 I missed the “Patriots”.
Nevermind.
I’m getting punch drunk. I’m gonna have to take a break. I’m so used to Goff haters in every single thread, apparently, that’s all I see.
My bad.

If all the 2023 QB’s have some flaws and questions about their play ability—I don’t want to just draft one of thee “less flawed” ones to say “hey he’s better than Goff !!”

If all the 2023 QB’s have some flaws and questions about their play ability—I don’t want to just draft one of thee “less flawed” ones to say “hey he’s better than Goff !!”

I’ve been saying that for months. Goodell and Fantasy Football are ruining this sport.

Goff isn’t a bad QB. He’s just not worth market rate. If we could keep him for $20 million a year (as opposed to $30+ million) I’d say keep him. The problem is that he’ll get $30 million+ from someone so we won’t be able to keep him at that number.

He’s currently ranked #13. He’s been ranked as high as #11.
He’s not going to get top ten money. That’s a false narrative.

He’s currently ranked #13. He’s been ranked as high as #11.
He’s not going to get top ten money. That’s a false narrative.